What's the connection between Marilyn Monroe and Alexander Technique? One of the last books she was reading before her death in 1962 is one by F.M. Alexander himself called Man's Supreme Inheritance. Her copy of this book featured in the Marilyn exhibition held at Bendigo Art Gallery in 2016. She was closely reading the book not long before her death as indicated by the many annotations up to page 157, where she had placed a bookmark.
You may have an image of Marilyn Monroe as preoccupied with her body image, but she have a great mind and was a true intellectual. Her library had over 400 books, with favourite authors including Joyce, Freud, Hemingway. 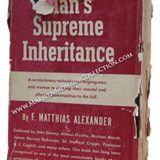 I would love to read those annotations! Looking at my own copy of Man's Supreme Inheritance, Marilyn would have been reading sections of the book such as:
. Conscious control
. Applied conscious control
. Habits of thought and of body
In her last interview, Marilyn says "An actor is not a machine, no matter how much they want to say you are. Creativity has got to start with humanity and when you're a human being, you feel, you suffer. You're gay, you're sick, you're nervous or whatever. Like any creative human being, I would like a bit more control so that it would be a little easier for me when the director says, "One tear, right now," that one tear would pop out. But once there came two tears because I thought, "How dare he?" Goethe said, "Talent is developed in privacy," you know? And it's really true. There is a need for aloneness, which I don't think most people realise for an actor." Richard Meryman, Life, 3 August 1962. The extract is from an edited version of the interview
By control, I think she is getting at something like the psychophysical unity stressed by Alexander - essential for great acting. Alexander himself had been a Shakespearean reciter.
Marilyn also owned another book by Alexander, the much more readable Use of the Self. Her copy sold at auction in 1999.

Posted by Jim Crosthwaite at 8:29 AM No comments:
Email ThisBlogThis!Share to TwitterShare to FacebookShare to Pinterest
Newer Posts Older Posts Home
Subscribe to: Posts (Atom)